I realize that I’m dating myself here, but when I was a kid, I used to watch I Dream of Jeannie all the time, along with my favorite, Bewitched. I always wondered why Major Nelson and Darren had a thing against their partners magically taking care of all the things (especially that Darren fellow). I mean, if my husband could nod his head or twitch his nose and clean the house, fix dinner, and banish annoying relatives, I would be all for it.

Anyhoo, I Dream of Jeannie was set in Cocoa Beach, Florida since Major Nelson and his buddy Roger Healy were both in the space program (still somewhat of a new profession at that time).

In the opening sequence, we see Major Nelson touching down in the shallow water on the beach in a space capsule and knocking over Jeannie’s bottle, which frees her and also makes him her master (yeah, I know – such lovely symbolism for the “enlightened” 1960s, huh?).

Still, there was something about a woman living in a bottle who could also do magic that was really intriguing to me. I always liked it when they showed scenes of the inside of her bottle – who wouldn’t want to lounge around in pajama-like harem pants among piles of cushions and pillows?

There’s also an I Dream of Jeannie Street in Cocoa Beach. They take their sitcom tributes seriously here. 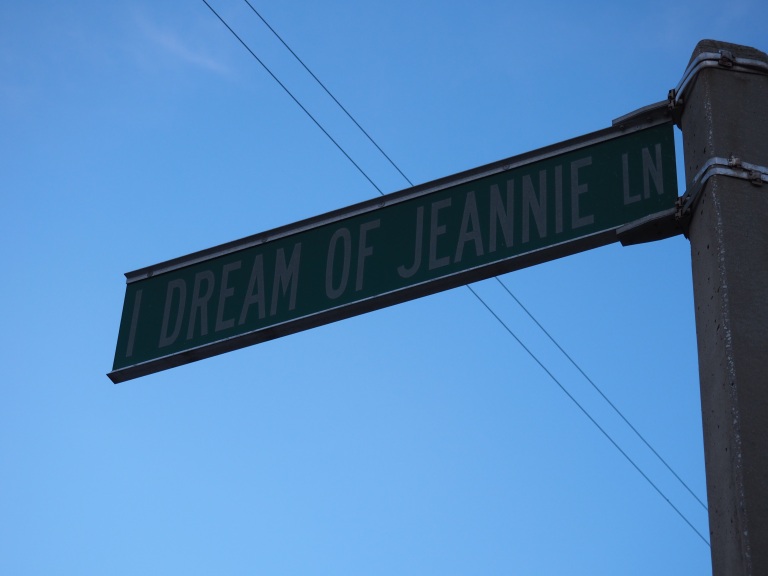